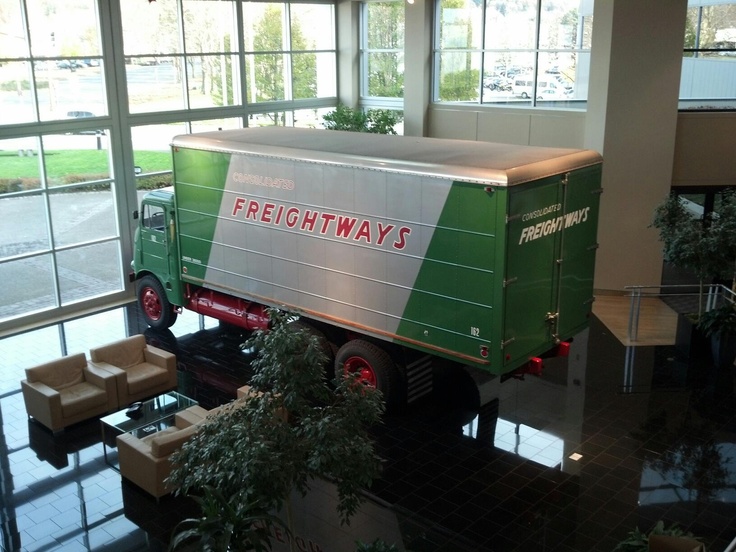 Consolidated Freightways (CF) was once the nation’s number one long haul trucking company. However, due to labor issues, skyrocketing insurance costs, declining freight rates and extremely low profit margins, the company was forced to declare bankruptcy in 2003. Upon filing, they immediately laid off 15,000 workers making it the third largest bankruptcy ever in the history of the U.S. prior to the financial crisis.

A significant portion of the value of their estate consisted of industrial real estate (226 motor freight terminals and land) located throughout the country. Because CF filed for bankruptcy on Labor Day weekend it was perceived by the Teamsters as a hostile gesture, so the initial creditors meetings and the process of liquidating the estate started out very acrimonious.

Sensing opportunity, many of the major national private equity firms, real estate investment trusts, developers, and commercial real estate brokers appeared in court to either make bulk offers on the entire real estate portfolio, or to obtain the rights to list and liquidate the properties. Because we had managed the pre-bankruptcy surplus property portfolios of both CF Motor Freight (CFMF) and its parent CNF Transportation Inc. (see Case Study- Corporate Surplus Property Portfolios), we had extensive knowledge about the entire portfolio. This knowledge gave us the edge over other national firms that were pitching for the business, and there were a lot of them.

After several meetings, we were also able to convince the creditors and debtor in possession that, given time, we could achieve more value for the estate through an individual marketing and property disposition than the bulk offers that were then currently being presented in court. As a result, we got hired over all the other nationwide firms that had multiple offices in multiple cities despite the fact that we were just two guys and a secretary on the west coast. (At the time Bill Vipond was partnered with Steve Shields comprising Transportation Property Company (TPC) in San Diego who handled the property disposition.)

Once hired, we had to overcome several logistical, marketing and sales challenges. One was that we were a small boutique firm located on the west coast and the portfolio consisted of 226 properties scattered throughout 45 states. In addition, the creditors and more specifically the Teamsters were mad about the massive layoffs and unfunded pension liability, so they scrutinized every area where there might be value to be recovered. As such, the real estate portfolio was at the top of their list. We also had to sell the properties at the court ordered appraisal prices, some of which we thought were overvalued and we had to do it by court ordered auction. This was a sales process unique to bankruptcy that we had never used before.

To help facilitate the nationwide transactions into a single coordinated effort, we ramped up on office staff and (quickly) formed the Transportation Property Network (“TPN”). TPN consisted of an association of real estate professionals located strategically in major transportation centers around the US. Many of these professionals came from the extensive network that we created from our management of the surplus property portfolios and other trucking clients that we had represented.

At the time conducting due diligence was also rather burdensome and due diligence “packages” had to be prepared and sent by overnight mail to prospective purchasers. Since most of these properties also contained undergound storage tanks, voluminous environmental reports had to be sent with every package. In addition, most of our buyers had never bought by “auction” before and were confused as to how the auction process worked. In the beginning, because of the publicity and with so many properties, we were inundated with requests for “packages” and were having trouble keeping up with the demand.

In 2003 the internet was relatively new and internet marketing was in its infancy. However, we saw an opportunity to create a website and populate it with all the property due diligence information, copies of the purchase contract, site inspection scheduling and information about how to bid at auction. Basically, everything you needed to know to buy the property(s). It sounds old hat now, but at the time very few firms were doing it and certainly not in a bankruptcy scenario. We also compiled an extensive list of all the trucking players in the North American market and began a dialogue with each of them.

We recognized that the portfolio had matured (it was 73 years old) and that properties that had once been best used for heavy-industrial, motor freight purposes, now may have had a higher and better use. This prompted us to reach out and market to all classes (not just industrial) of developers, investors and real estate professionals in each market where the properties were located. As such, on auction day, we had different classes of buyers all underwriting with their own valuation numbers and bidding against each other. This strategy created somewhat of a bidding frenzy that drove up the sale prices. For example, in Brooklyn, New York we had trucking companies bidding against waterfront condo developers for the same property.

During a period of twenty-eight months, we conducted twenty-three auctions and sold the properties for over $425,000,000. This amount was approximately $61,000,000 over their appraised value and $200,000,000 in excess of the initial bulk offer that the court received at the inception of the bankruptcy.